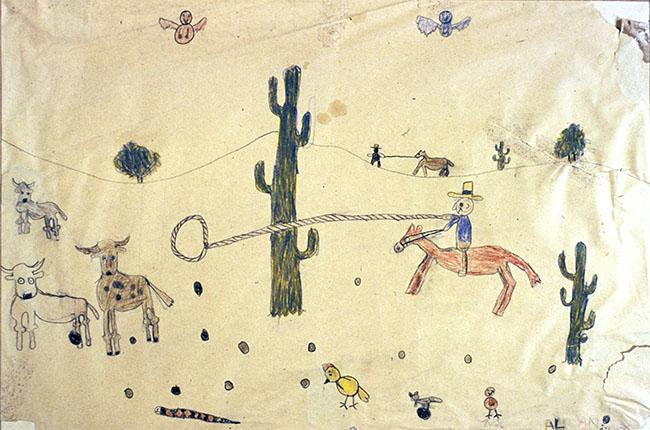 Small unidentifiable spheres dot the ground at almost regular intervals, and various tropical birds hold court in the sky, while an elderly cowboy extends his lasso, which like the snake, is curiously straight, in the direction of three surprised looking cattle. The horizon is obscured by undulating hills, and a strange melange of deciduous trees and cacti—both in morphing shades of green, from neon to forest—push through the arid ground throughout the composition. A surreal tour de force, and indeed, a conceptually compelling meditation upon the strangeness of landscape, Alan’s drawing serves as the launching point of Dear Alan; it speaks to a persistent interest in issues pertaining to landscape, methodologies of collecting, and mythologies of Alberta, writ large.

Image courtesy the Alberta Foundation for the Arts

○ Alberta Foundation for the Arts