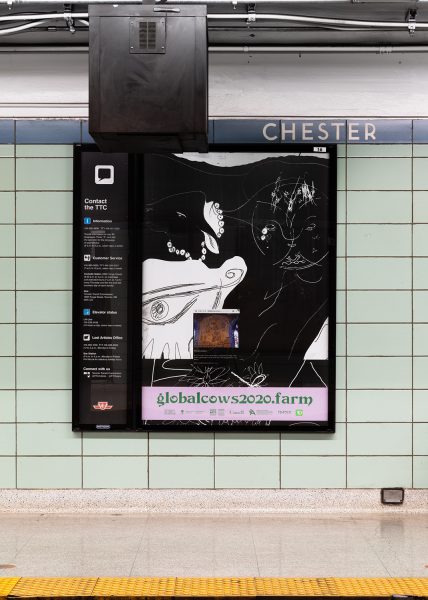 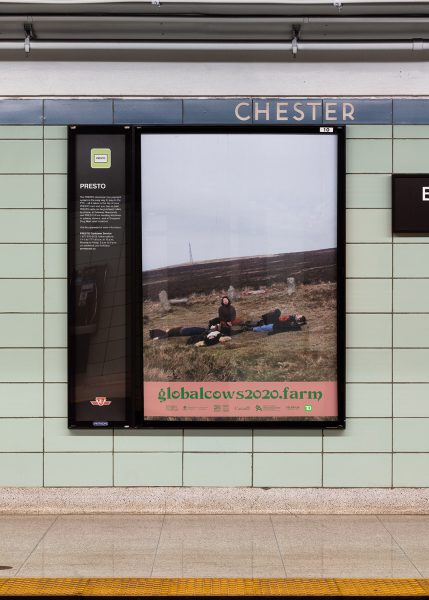 At the intersection of trails

After placing pedometers on the legs of his herd, an Arizona dairy farmer discovered that his cows take approximately 12,000 steps per day.1 These steps represent the animals walking toward, and around, grazing pastures as well as to-and-from milking sheds. Like most animals, cows learn preferred routes or ways of walking and therein create provisional trails of their own. For artists Vanessa Disler, Tiziana La Melia, Nina Royle, Lucy Stein, and Charlott Weise, the continued intersection of human and animal trail provided thematic motivation for the collaborative project, Global Cows, which spans walking, drawing, painting, and digital wayfinding.

In the spring and summer of 2019, Stein and Royle invited Disler, La Melia, and Weise to Cornwall (England). During this visit, the artists undertook a series of walks on the Tinner’s and Coffin Way, which wind through moorland and Bronze Age field systems toward the coast. Along the way, the artists encountered a C15th fresco-secco in St. Just church, numerous Bronze Age sites, as well as the former homes and graves of notable St. Ives School artists. The intersection of these paths with animals out to pasture prompted the group to consider the literal, symbolic, and mythological representations of cows. Through making observations while walking, amassing research, and drawing alongside one another they produced a series of drawings and an eight-meter-long fresco-secco displayed at Damien & The Love Guru (Brussels). Central to the panoramic painting is a conjoined motif wherein the world becomes a cow, and a cow becomes the world—as a continued site of interpretation and production whose abstract form is both cultural and industrial.

Not unlike the remarkable four stomachs of a cow, which allows the animal to intake food for rumination, consumption, and extraction of nutrients at a later time, the fresco-secco was far from the digestive conclusion of Global Cows. Working with CFA (Milan), the artists created a two-part day and night online digital fresco. In reference to the original painting, the digital interpretations resemble X-rays, which peel back the finished surface to reveal processes of thematic and compositional underdrawings. Upon entering this digital space, the soothing sound of chimes and pastoral cowbells background a series of neolithic-looking trig points mapped across drawings of interconnected bodies, cows, and eyes. Each of these points serve as a portal to a narrative, an image, or an open-source link that discusses the artists’ process or provides associations stemming from the cow-related content: spanning from animal science, conspiracies, farting, lactation, and the gendering of cows amongst much more. These points can be engaged at random, or through a series of artist-led tours through the fresco—either of which poetically elucidate a multifaceted understanding of cows from a global perspective, which transgresses the limits of cultural, physical, and psychological borders. Global Cows presents a complexly intertwined narrative of solidarity and respect for an animal so ubiquitous it sometimes seems to disappear. Collectively, these points emphasize the role of intersection with perception through differentiating how personal cultural experiences with nature guide our, sometimes singular, perceptions of it.